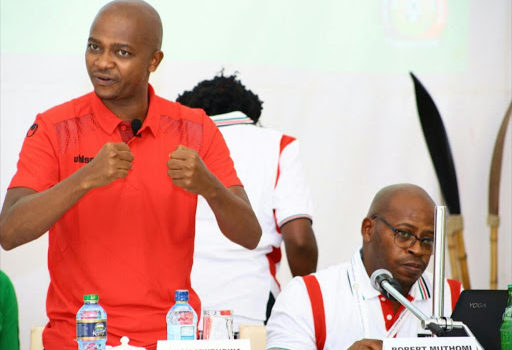 FKF President Nick Mwendwa and his administration had every reason to fear that the squandering of the Fifa Forward grant on Supersport’s vanishing van would provide their opponents with a significant, perhaps decisive trump card to play when time would come to hold the next FKF presidential elections at the beginning of 2020. Mwendwa had wrestled power from incumbent Sam Nyamweya in acrimonious circumstances, his main opponent, lawyer and Gor Mahia FC chairman Ambrose Rachier all but accusing him of bribing delegates to the tune of Sh125,000 (about $1,250) per vote. “I do not have proof but have word that it happened”, Rachier told the Kenyan media, before adding, quite implausibly, that he was looking forward to working with the new chairman.

It hadn’t been the most auspicious of starts for the 37-year-old entrepreneur, handsome as his winning margin – 50 votes to 27 – had been in the end. There was every chance that his rivals would seize on the opportunity that the OB van fiasco presented them with to challenge his legitimacy. The Broadcasting initiative had been Mwendwa’s response to SuperSport terminating their contract with the FKF – a termination which, it could be argued, had been at least partly caused by Mwendwa’s decision to enlarge the KPL to eighteen teams, including his own. Money was so tight within the Kenyan FA that players from the women’s national football team were left waiting for the reimbursement of some of their personal expenses – let alone the payment of their match fees. If it could be shown that Mwandwa’s administration had misused over $1m of Fifa money…

So perhaps it shouldn’t come as a surprise that it took a full six months for the collapse of WTS Media Group to become a matter of public knowledge in Kenya, the first reports being published on 11 October 2019, following leaks from the FKF board. WTS had appointed administrators on 11 April.

11 October. That is six days after the FKF had approved the nomination of an Electoral Board at its AGM, even though there were still five months to go before Mwandwa’s mandate expired. The speed at which the wheels of the electoral process set in motion surprised everyone. County officials would be elected on 23 November. Those officials would then pick both the FKF National Executive Committee and its president in early December. Why such haste? Mwendwa’s critics immediately seized on this. To them, this confirmed that the FKF president had no wish to see a new administration look into what had happened with WTS Media Group Ltd, and in which black hole over $1m of Fifa’s money had been sucked into.

What is more, it did look as if FKF had taken liberties with Fifa statutes as well as its own. For example, the ‘new’ Chair of the FKF National Executive Committee, Professor Edwin Wamukoya, had been picked by the Mwendwa camp when he was in fact ineligible for the position he’d occupied since 2016, as it was expressly prohibited to serve two consecutive terms.

Even more seriously, it was claimed that 5,000 out of the 6,000 clubs which were affiliated to the FKF had been denied the right to nominate their representatives at national level. The eligibility rules had been narrowed to such an extent that it was virtually impossible for any ‘outsider’ to compete in the elections. The result was that in 39 out of the 47 counties where the election took place, presidents, deputies and officials ran unopposed.

Mwendwa too was to stand unopposed for a second and final term as FKF president, something which can’t have displeased the Fifa hierarchy too much in political terms, as Mwendwa had a been a keen Infantino supporter back in 2016, when the then-UEFA official made his bid to become Fifa president.

Mayhem ensued. Following representations by over sixty Kenyan football stakeholders, Kenya’s supreme sports arbitration body, the Sports Disputes Tribunal (SDT) annulled the elections which were supposed to take place on 7 December, five days before voting was supposed to start – cancelling as well the borough elections which had already taken place.

Fifa intervened through its Governance Services Manager Sarah Solemale, insisting that the elections should take place before 10 February 2020, when Mwendwa’s presidential term would expire. They did not. The ball was hit further down the park, and a new date was set towards the end of March, 2020, to which Fifa agreed, stating this time that 30 March would be the absolute limit as far as they were concerned.

That was not to be. On 17 March, the SDT, whilst finding in favour of the FKF on a number of points, ruled that the eligibility rules put in place by the Kenyan FA constituted “clearly an illegitimate barrier to candidature and fully [explained] why […] the positions of President and vice president have only one candidate making the election effectively a coronation (our italics). There are apparently numerous other positions in which there is no contest to the candidature of the incumbent”.

The SDT went further. The Court effectively dissolved the FKF board, stripped Mwandwa of the presidency and called on Fifa to intervene. It is worth quoting their decision in full, if only to show how unequivocal it was.

“The third option presented to the Tribunal is to request FIFA to appoint a normalization committee in terms of Articles 8 and 14 of the FIFA Statutes. This is the route that best commends itself to the Tribunal and accordingly this decision will be transmitted to FIFA with the request that it appoints a normalization committee of the Football Kenya Federation, whose mandate would include to run the daily affairs of FKF, to review the FKF Constitution 2017 and to organize and conduct the elections for FKF. It is hoped that this proposition will commend itself to FIFA and that it will take immediate steps to appoint a normalization committee and advise FKF and the Tribunal of the identity of the persons recommended for such appointment. […] For the avoidance of doubt, the term of office of the present FKF NEC [National Executive Committee] is now at an end”.

Except that, for Fifa at least, it wasn’t.

Véron Mosengo-Omba’s email arrived in FKF Secretary General Barry Otieno’s inbox on 25 March, eight days after the SDT ruling which had expressly asked for Fifa to intervene in FKF’s affairs.

“First and foremost”, Mosengo-Omba wrote, “we would like to highlight that the FKF statutes do not expressly recognise the jurisdiction of the SDT as being the ultimate arbitration forum at national level. Moreover, we note that the SDT is not a national arbitration tribunal in the sense of FIFA circular 1010 dated 20 December 2005. Despite the aforementioned, the FKF surprisingly subjected to the SDT by its own initiative while it was not obliged to so do as per its Statutes. This however does not entail that the SDT decisions are binding on FIFA when it comes to its prerogatives and remit for which the Court of Arbitration for Sport (CAS) in Lausanne, Switzerland has exclusive competence (cf. art. 57 and 58 of FIFA Statutes, 2019 edition). Therefore, we wish to emphasize that the relevant SDT ruling has no legal effect on FIFA.”

“In this context and for the sake of peace, FIFA is ready to meet as soon as possible with the FKF, the SDT representative(s), the Minister of Sport and any other relevant stakeholders in order to find a way forward. In this respect, should the world health situation not evolve positively by 6 April 2020, we shall contact you to explore other possibilities including a meeting by video conference” (As we’ve seen, this meeting has now been pushed back to May 2020 at the earliest).

“Pending this meeting and for the avoidance of any doubt, the current FKF Executive Committee members, including its President, shall remain in office”. Even though their mandates had already come to an end, irrespective of SDT’s ruling.

While this must have been sweet music to Nick Mwendwa’s ears, the SDT Chair John Ohaga could hardly believe his own. “It appears to contradict what I discussed with Fifa”, the judge told Standard Sports. “If Fifa are unhappy, they can appeal to CAS. FKF runs football in Kenya first and foremost and they have to abide by decisions of the Sports Disputes Tribunal of Kenya”.

Why was it then that Fifa, and more pointedly Véron Musengo-Omba, felt compelled to fall back on debatable technicalities to justify their inaction in Kenya, when they had certainly shown far less reluctance to act in the case of Trinidad & Tobago?

In one instance, the supreme sports authority of Kenya had annulled two elections which it considered iniquitous, following a clear judicial path; but Fifa had chosen to look the other way, despite being asked to intervene.

In the other, that of Trinidad and Tobago, a new administration had been elected following a democratic process; yet Fifa had inflicted the most serious punishment it could resort to – a normalisation committee – less than four months after this administration had assumed power.

In one instance, Fifa had de facto protected an ally of Gianni Infantino, Nick Mwendwa, who stood to face some uncomfortable questions about the OB van debacle – in which Fifa and, indeed, Véron Musengo-Omba had played an active role – should he be replaced at the head of the FKF.

In the other, Fifa had de facto punished a regime which had put an end to the reign of another ally of Gianni Infantino, former TTFA president David John-Williams, who also stood to to face some uncomfortable questions about the use of $2,5m devoted to the construction of T&T’s ‘Home of Football’, in which Fifa and, indeed, Véron Musengo-Omba had played an active role.

In both instances, a normalisation committee – and its pendant, the refusal to resort to it – had been key weapons in Fifa’s arsenal, and allowed it to assert control over a member association, and this when Fifa’s own statutes (Article 8.2) specify that “executive bodies of member associations may under exceptional circumstances be removed from office by the Council in consultation with the relevant confederation and replaced by a normalisation committee for a specific period of time”.

That the FKF found itself in ‘exceptional circumstances’ could not be denied, when Kenya’s supreme sports arbitration body had annulled two rounds of elections. But Fifa refused to heed its request for help. In which way could Trinidad & Tobago’s circumstances have been more ‘exceptional’?

This brings to mind the wording of another article of the Fifa statutes, article 14.1 (i), which reminds Member Associations that they have to “manage their affairs independently and ensure that their own affairs are not influenced by any third parties”; which, in turn, begs the question: could one of these ‘third parties’ be Fifa itself?

“an investigation by Philippe Auclair for josimarfootball.com, reproduced here with their kind permission”?